I've been thinking lately about the right of children to "try." So much of data-driven, test-apprehensive pedagogy has set the shared value at the right answer. Failure is to be avoided at all costs. If they can't pass the standardized test, push more, push harder. And the child's right to The Try disappears. Deep in him is a fear of failure and, consequently either untenable stress or a coping mechanism or two that allow the child to say he doesn't care.

In Jen Miller's Kindergarten class at Bensley Elementary School, a Title One public school in which we are in our second year of a Reggio-inspired pilot, the children have been exploring various ways to stick objects together: so far, with glue stick, liquid glue, scotch tape, and masking tape. When friends were decorating a box holding donations of bug spray to send to Puerto Rico, five-year-old Kenyiah asked, "Could we turn this box into a robot?" Believing they might be ready to put some of their new "sticking" techniques to use, the next day I invited a small group of interested makers to design and construct a robot. The process was full of tries. Tries, failures, and re-invention regarding the robot. And tries regarding the social terrain of working collaboratively, especially tricky because it is still early in the year, children tend to find their voices before they find their "ears," and engagement was so deep that everyone cared deeply about how the robot should be. Here is an excerpt from a blog post I wrote for Jen's class blog.

This morning, as I unpacked tissue boxes and other materials for "making," a small group was already assembling, eager to work on the robot. In fact, Anderson couldn't wait for the making table to be open (it is the "sign-in" table first thing in the morning). He sat down to draw his idea for the robot. 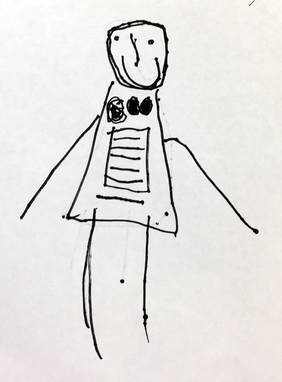 Anderson's robot is a food making robot. You push a button and whatever food you want comes out of the element on the robot's body.

When the small group convened, we looked at Anderson's robot together, and then the other children in the group drew their own robots...for the purposes of clarifying for themselves their own images of "robot," and of communicating with each other so that they could decide what kind of robot they should make together.

Why one robot, instead of inviting each child to make his/her own? Collaboration requires much of the children in the group. They must articulate their ideas, verbally or through drawing. They must listen to the ideas of the others and adjust their own ideas for the sake of the project. Sometimes the group doesn't choose what one child desires, and that child has to muster the emotional flexibility to move on. When there is a big problem (you will see, below, that there was!), the members of the group support each other to stick with the task despite frustration. And...there is great pleasure in collaboration, in working with friends toward a shared goal. We want the children to experience that! 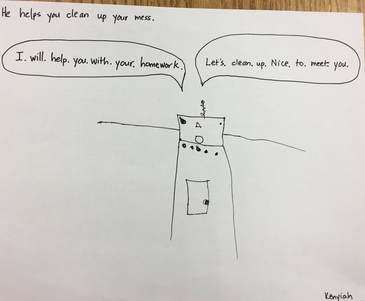 It is Kenyiah's intent that you read the speech bubbles in a robot voice. 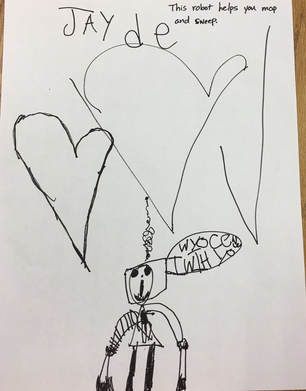 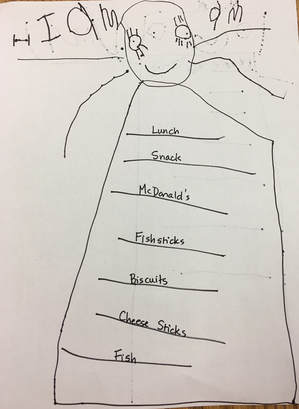 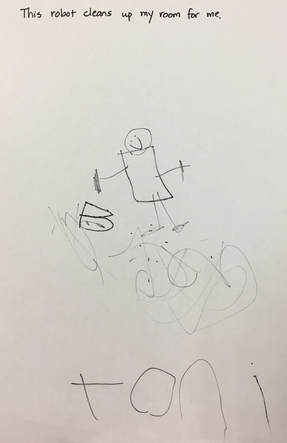 The small group reviewed the drawings when they were finished. Analysis showed that there were two food robots and three cleaning robots. That gave the children an opportunity to experience the democratic process: the idea with the most support gets implemented. It will be a cleaning robot.
The first big negotiation came with a disagreement about which box the children should use for the head of the robot and which should be the body. Kenyiah insisted that the long tissue box should be the head and the cube tissue box the body. Everyone else thought that the long box, positioned vertically, should be the body and the cube should be the head. The children tried to convince Kenyiah that "heads don't go that way." She was not swayed. When the decision came down to a vote, and the majority ruled, Kenyiah decided to leave the group (don't worry...there's a happy ending).
Putting the head and body together was easy. The children were confident that they knew how to use the glue to do that. And they agreed on a material for the arms easily as well. However, attaching the arms to the body was another thing altogether. 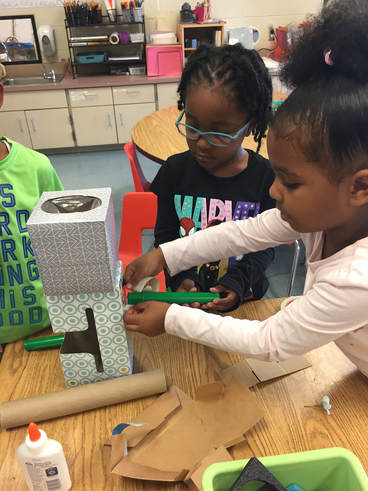 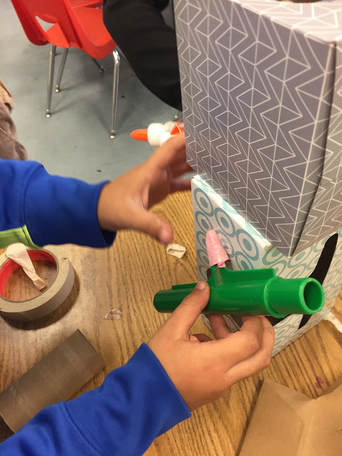 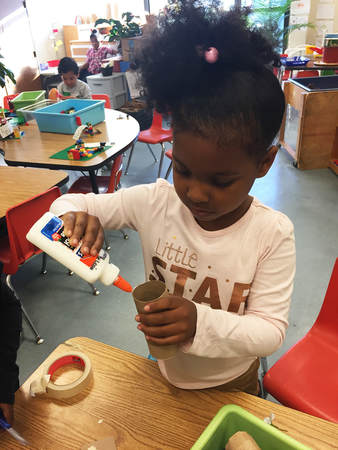 Jayde was confident she knew how to stick the tube to the box. She expertly ran a bead of glue around the edge of the opening of the tube.
As you might predict, her tube did not stick to the box. JT tried Anderson's glue-tape-to-the-box technique, this time with the cardboard tube. 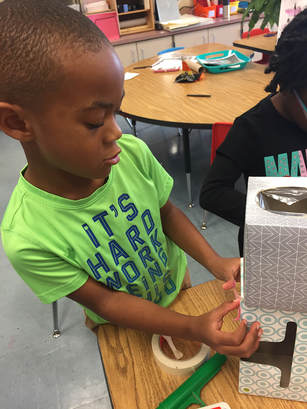 In the end, Jayde and Toni figured out how to glue the side of the tube to the box, giving the robot an arm in the down position. And JT and Anderson used a technique I lent them, cutting slits in the bottom of the tube, folding up the tabs, and attaching the tabs to the box...giving the robot a second arm that stuck out from the box.

At Meeting the robot project group presented their work in progress. Kenyiah insisted, again, that she was not part of the group. However, after Meeting, her motivation renewed, Kenyiah came up to me and, with her sweet smile, said, "I want to be back in the group." 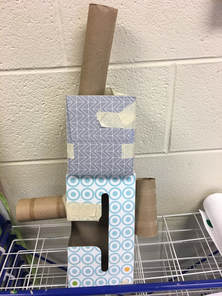 When the children returned to the robot on Day 2 of construction, they added a head, legs, and feet. On day one, there had been some discussion of the gender of the robot, with boys insisting it be a boy, and the girls insisting that it be a girl. Though the children appeared to compromise on the first day, naming the construction "Boy-Girl Robot," they revisited the topic on day two. In the following video, they seem to negotiate the same compromise all over again. Then the video shows the children struggling with the robot's penchant to topple over. The second half of the video opens after the children have taped the robot's feet to the table but all the movement around dressing him/her has pulled the robot from the table.

The children eventually became frustrated enough with the instability of the robot that they paused their "dressing" to work on a solution. "Let's glue him to the table!" they agreed. To save the table and the robot, I redirected them to the materials in the making space, and they decided to tape the robot to some cardboard and then the cardboard to the table, as seen in the picture, below.

They were then able to return to dressing the robot, which included, in the end, signs such as "DBSA" (Don't be sad), because someone had colored part of the body red and the children interpreted that as blood.  And "ROBTG." (ROBOT GIRL; this sign was written by a girl, who did not make public the significance of the letter G). Laila, both a member of the group and holding herself a little apart, drew the robot a face and made a bandage for the bloody spot. And then, observing the process, she created a checklist of the stages of the robot's development.

He got a face...check. She's getting hair...waiting for completion before getting a check. Eventually, Anderson and JT left the girls to dress the robot. At that point, Kenyiah said, "The boys ran away, so it's a girl now."
Toni replied, "The boys are so cheeky! Our robot's gonna be 1 years old."

Projects like this one bring many opportunities for children to try...and fail...and try again. Through them, the children exercise

Courage...
Persistence...
Tolerance Of Failure...
An understanding of the value of failure

For more stories of children's right to try in the context of drawing, see the blog post, "The Study Protocol."