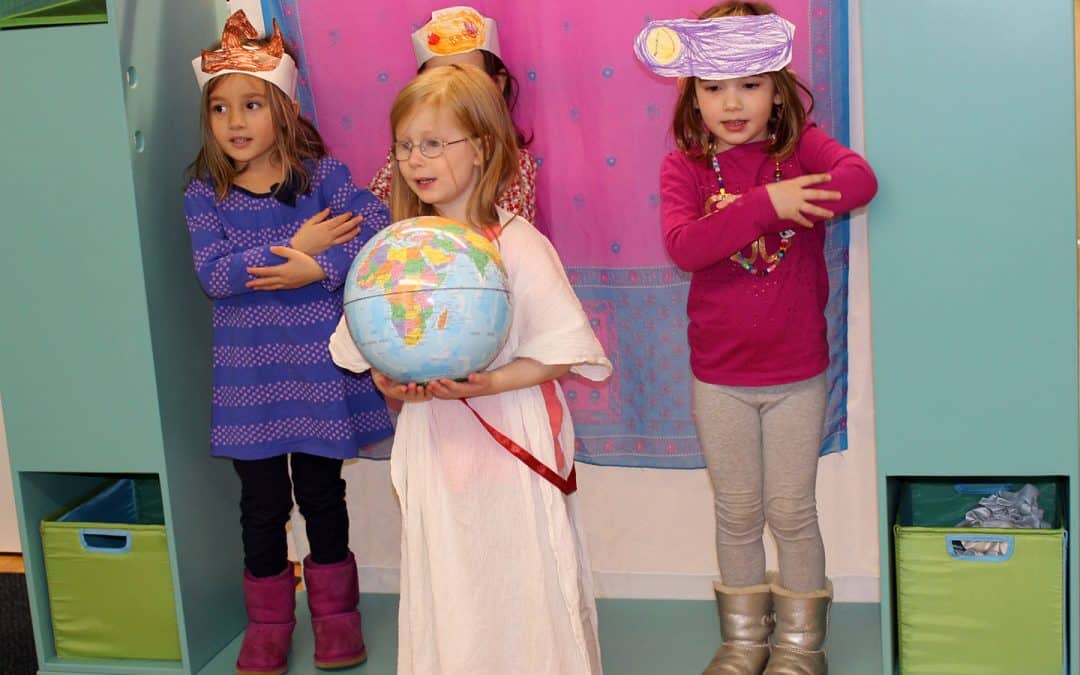 Conversations with children about philosophy can be particularly rich. Big questions like “What is real?” or “What makes me me?” or “What happens after people die?”, big questions without obvious answers, are like playgrounds for the intellect.  Some of the deepest engagement in conversation I have witnessed has been around these intangible, emotionally-laden topics. A bit like conversations around imaginary phenomena, like angels or fairies. In some ways, philosophical conversations and conversations from the imagination seem to have similar trajectories. The four- and five-year-olds I know have strong opinions and strong emotions about both, and if, through supported class conversation they have found their voice, they can engage in impassioned, sustained dialogue. So it is with topics around theology.

Emotion-laden topics like death and controversial ones like theology can be some of the most fertile ground for dialogue, listening and good thinking, precisely because of the affect they inspire. I have long held that there’s a particular reciprocity between emotion and intellect and have known groups of children who first began to engage in cognitive dialogue because the topic inspired emotional engagement.           -From the blog post, “Difficult Topics: Death And Beyond”

Here is part two in “Constructing An Image Of God”

One day at Morning Meeting we tried something new. We asked the children:    What would you like to talk about today?

We were intrigued that they returned to dialogue about God.

Evans: I thought it would be interesting if we could make a “tree of God.” It’s just a tree and you have to have God on it.
T: And what would God do on a tree?
Georgia: Make apples fall!
T: Is God in apple trees?
Many voices: No!
Honor: Yes. Well, God makes the tree grow taller and taller and taller. And He’s also in the seed to help it grow.
T: You didn’t agree about that the last time we were talking about it. Some of you said God is in the seed, and so God makes the tree grow. And some of you said the planters make the tree.
Honor: God makes people to plant the seed while God is in the seed and then, poof, a tree comes.
T: Does every seed have God in it?
Many voices: Yes! No!
Georgia: God is in people’s hearts. God is in everyone’s hearts. God is in everything.
Millie: Everything has guts.
Meadow: God’s a spirit.
Carrigan: He knows how He’s a spirit and he went to all the skies and makes more Gods. But He doesn’t cut up Himself. He just makes more Gods with His hands and then he makes more Gods.
T: What do you think God is made of?
Meadow: Spirit stuff. Sparkles and [He is a]  spirit that looks like a shooting star.
T: Oh. When I asked you to draw a picture of God, nobody drew a shooting star. Everybody just drew something that looked like a person. Does God look like a person?
A few voices: No!
T: Are you changing your mind, then?
Evans: God is floating up.
T: What shape is He?
Savanna: He’s a bunch of shapes.
The children considered how big God is, ranging from tiny tiny to as big as the world.
Hartley: God is not making us move or something. Something is in our brain [that’s] making us move and talk.
T: What is it?
Sammie: That’s God.
Millie: He has a little tiny voice part.
Hartley: There’s something in your body that talks and moves, and God is almost like this big (about a foot long).
T: Are you saying God couldn’t be in your body if He’s that big?
Maggie: Well, I think somebody told me that God is actually bigger than the planet.
T: Then how could God be in a seed? Or in your body?
Adelaide: Well, He needs to be magical to know how to make people.
Honor: He shrinks, grows up, shrinks, grows up.
Blair: He has to make the planets, because that’s what He does. He makes the whole world.
T: So what do you think He looks like?
Honor: Outer space, maybe?
Hartley: And He has an outer space helmet on.
Blair: I think He has a Japanese skirt and He has a belt that goes across here.
T: So you think He looks like a person. Savanna thinks He looks like a lot of shapes.
Maggie: He has the same shapes as us.
Savanna: And He’s taller than a skyscraper.
Meadow: God looks like a shooting star with a space helmet on.
Evans: God must have the whole world in His hand.

Thinking about the “play” of the song, the children generated verses in earnest, considering ideas from shared experience and from those that are important to them.  Their verses:

A child documents the verses as her friends generate ideas.

The children did put on the play, which they called “World,” with a part for everyone and choreography, costumes, set design and stage directions all by the children. “He’s got all the birds in His hands,” with, as the children designed, birds in the background and God holding the world in the foreground Watching the video of “World” immediately after taping