Dreamworld and Languages For Symbolic Thinking 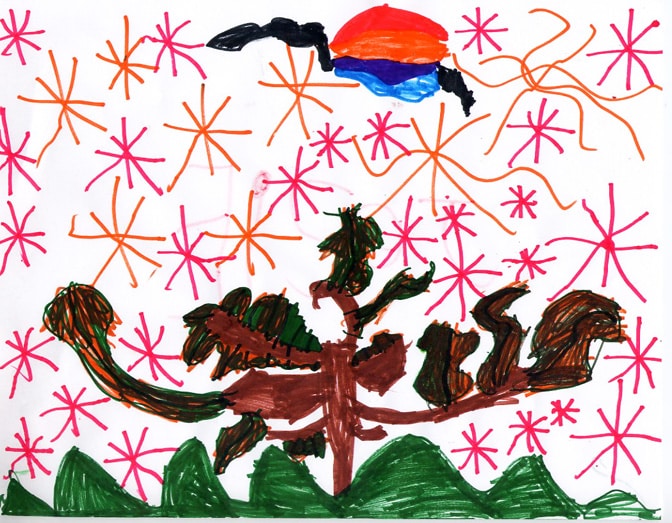 A small group of children (all girls, as this is a story from a single-sex school) met to plan what to build next on the block platform. We had set up this protocol…planning together before building…to encourage collaboration and small group project work, and by this time of year the children embraced the protocol as their own. In the midst of this particular planning meeting, Peyton told of a nightmare she had the night before. At that, the girls’ planning shifted. They decided to build “Dreamworld,” with a tall building for making scary dreams and a shorter but much wider building for making nice dreams. The reasoning behind the size differentiation was that “Maybe the good dream place is going to be bigger, because there are more good dreams than bad dreams.” The girls declared intent to “look up all the things that little kids dream” (research!). Then they reconsidered and added older kids’ and grownups’ dreams to their intended research. Peyton suggested that they might draw dreams to put into the dream structures. Here is the story of the construction of the highly symbolic “Dreamworld.” The good dream team brought in “natural materials,” saying that they should be in the good dream structure because they are beautiful. Peyton put a plank into the bad dream structure, saying that it was for a computer for entering good and bad dreams. Later the girls added loose parts to represent the computers. The children represented good and evil in highly symbolic ways. The scary-dream pair used red blocks and cubes to represent the blood and lava from which bad dreams are made. Their computer has chairs for sitting in and red cubes as raw material for the computer to use to make the dreams, or, as Peyton said, “to erase all the good dreams and put in the bad dreams.” Detail of the scary dream structure, with the dragon mask from a play the children produced, a scary piece of wood donated by the nice dream team, and red blood and lava raw materials In addition to beautiful natural materials the nice dream team surrounded their structure with yellow “sunshine,” the raw materials for making nice dreams. Brookie (responding to the other team’s scary face mask?) made a smiley face, complete with eyelashes, out of tree cookies…another symbolic representation of all that is good. Peyton works on a wire that “buzzes” the good dreams, transforming them into bad dreams. Working on a “bad dream safe,” into which all the bad dreams (represented by blue tiles) can be kept safe, “when no one takes them and turns them into good dreams.” There was a fair amount of conversation about stealing dreams and transforming them to the opposite type: bad dreams turned into good and vice versa. “The really big bad dreams on the first floor.”

The bad dreams are going to the big kids, mostly. We took the Dream World project to the whole class at meeting, and we had a bit of a conversation about what is clearly a powerful and “dangerous” idea for the children.“Dreams are your imagination,” the children said, and “Dreams come from your head.” But, as symbolic and flowing as the children’s graphic representation (through blocks) was, they didn’t really go there in their conversation. It seems that these two ways of knowing…constructing and speaking… are not equivalent, even if both are facile languages for the children. The question is, are they ever equivalent? Or does what the children draw or paint or construct or sculpt have a more complete connection to the depth of their thought?

The next day the Dream World construction group continued to work on their block structures, and at meeting I followed the hypothesis I made the day before, wondering if the children would have more success articulating (and clarifying for themselves) their thoughts about dreams through graphic languages than verbally.  I invited the children to draw what a dream looks like. They floundered for a few minutes…making stabs at drawing as they dug for ideas. Then Molly drew a highly symbolic image of “dream,” and the others seemed to come unstuck. Drawing their ideas seemed to support verbal articulation as well; it was much easier for them to put words to their ideas once they’d been drawn. Here are the children’s dream images and their verbal explanations. Your dream is one big cloud inside your head. The little clouds come from a button that makes the clouds. God pushes the button, and the clouds start puffing from all around up into little tubes. They go in a circle to make the big cloud. The dream happens in the big cloud. Molly The dream goes around and around the head until it gets to the hole. All the dreams I ever had are in the hole. The hole grows bigger and bigger.

What do you think? Have you ever noticed children’s symbolic representation surpassing their ability to articulate the same idea verbally? Have you noticed how graphic representation can support verbal articulation…and how verbal articulation can support graphic representation? What happens when, as Loris Malaguzzi stated in “The One Hundred Languages Of Children”, we “steal 99” of children’s potential languages? And what would the classroom in which children become fluent in graphic languages look like? Those are the richest classrooms, in my opinion, in which every child might find her voice.