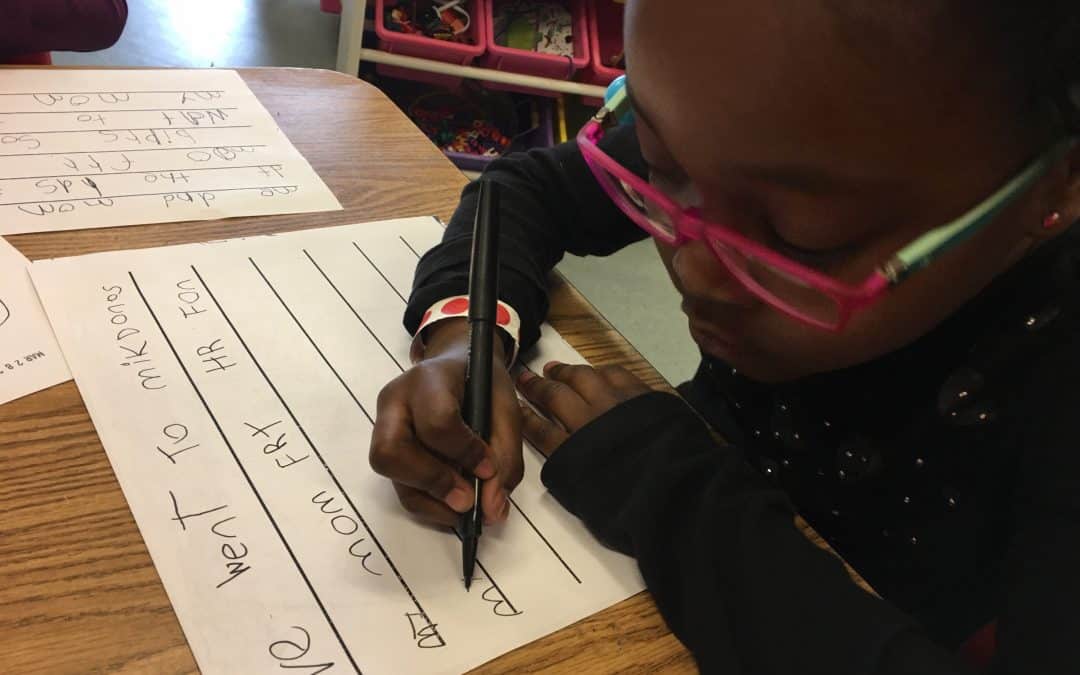 The journey on which I find myself…supporting teachers and schools working with principles of the Reggio Emilia approach…has many paths. I have learned that this is one story that does not have to start “at the beginning.” Or, rather, the beginning can be found in more than one place. Because every element in the philosophy depends on all the others, because every aspect is woven through and becomes fabric with threads from every other aspect, where you start can be tailored to your own context. I have learned more about this recently as I observe what has happened this year in the classrooms where the teachers felt most comfortable starting with revamping their writing curriculum. In the past, teachers gave children prompts and worksheets, and the children rarely wrote continuous text or used writing for their own meaningful purposes. Children lacked a strong sense of agency, and they tended to wait for directions even when invited to make their own decisions. This was one of teachers’ greatest frustrations, and this was where we started. We began with Story Workshop (a precursor to Writers Workshop. I could call it all Writers Workshop, but I want to emphasize the importance of helping children access their ideas and make them visible, whether or not they can do the actual writing themselves yet). Now, all the children can tell stories; all are writing parts of their stories independently; and some are writing multi-page stories on their own.

The magic that happened was that through Writers Workshop teachers’ “image of the child” has changed. They are listening to the children’s stories and watching them solve problems, seeing the depth of intelligence and the passions and interests of each child in new ways. As teachers get to observe the children’s amazing thinking, they come to expect the children to have important thoughts, which supports teachers’ disposition to listen.  Long-term collaborative projects are growing out of Writers Workshop (e.g., the writing of puppet shows and the creation of a “writing museum”). I’ve been able to model documentation through Writing Workshop, and the resulting transcripts and photos have supported teacher research. And, of course, I am in the classroom, so there have been opportunities to support teachers in tweaking the learning environment.

What follows is our version of the Story/Writers Workshop protocol, borrowed from Lucy Calkins’ work decades ago, and adapted through my own teacher research. Each child has a pocket folder for her writing, with a side for finished work and a side for work in progress. Children may write from the imagination or from experience, sometimes they are inspired by the stories other children are writing, and sometimes teachers have to help children get unstuck when they are thinking about what to write, but the teacher acknowledges that the child has much to say and only needs to access it in order to write about it.

STEP ONE IN THE WRITING PROCESS: DRAW SOMETHING HAPPENING

In the writing process…for adults or for children in Writers Workshop…there’s a particular sequence that helps an idea become a piece that readers want to read. Since writing is, in essence, expression of what an author knows or thinks or imagines, the process begins with the idea. An adult might mull an idea over in her head for some time, “writing before writing,” before ever putting pen to paper. Young children don’t represent as completely in their heads; and so just “thinking” is not an effective pre-writing exercise for them. Children’s representation, though no less worth “reading,” is physical and visible (as in play or construction or drawing). And so, we begin the process with that physical or graphic representation. In Story Workshop (a precursor to Writers Workshop), we most often ask children to draw as the first act to express an idea, but in fact, stories can come out of paintings, constructions, or sculptures as well.  However, the media for drawing (pens, pencils, markers, etc.) are most accessible in school and in the child’s world,  and knowing how to draw one’s ideas can be a foundation for other graphic representation. So we ask children to draw. “Draw something happening,” we urge them. The “something happening” invites the story, whereas “formula” drawings of, say, a static house, flower, and sun do not. At this point, it doesn’t matter whether the child represents something that actually happened to him or something from his imagination.

STEP TWO IN THE WRITING PROCESS: TELL THE STORY

After the child draws we invite him to tell his story, and we scribe for him. In this way (especially if we read his story back to him), he sees his thoughts, ideas, and imagination put into print. He sees that writing the story down lets others know what he thought and said. He sees that the story, once written down, doesn’t change unless he changes it. And, if you make it explicit as you scribe for him, he sees what writers do…break speech into words, leave spaces between written words, consider what words begin with, and so on. This is an opportunity to talk about stories needing “problems” and resolutions; about story form and characters and a connection between picture and story. Story Workshop is an important learning opportunity, one through which we don’t want to rush. It is writing that the child can do long before he can physically write, and a way for him to understand the process and power of writing.

STEP THREE: FROM DRAWING TO WRITING

Revision tends to happen organically for young children. When they are telling their stories, they may suddenly stop and say, “Oh, I forgot to draw the _________!” Returning to the work to add a character is revision. When you are reading the story back to the author, he may request changes. Also revision. When he is reading the story he has written himself to you or to a friend, he may decide to return to the story to make changes. When these things happen, we want to point out to the child that what he is doing is revising, something authors do all the time to make their writing clearer or more interesting for the reader. Some classes have an “author’s chair,” in which the author sits to read his story to the class. After the author reads the story and shows the picture, he can take questions or comments about the piece. Many teachers use the “author’s chair” as a form of publishing. But it can also serve as a pre-publishing step; after reading his story to the group, a child can ask his classmates for suggestions to improve the story and then REVISE it before actually publishing it. When children are older we can ask them to include revision more formally in the writing process between a first draft and publishing.

A class of Kindergartners with whom I am working took the brainchild of one little boy and are making a “Writing Museum,” to display their work and introduce visitors to drawing animals and playing games with words, not to mention the food and music they plan to provide. In another Kindergarten class, children occasionally write notes to the principal. Two girls wrote a letter to the asking if she would please bring her dog to school. Last year two children wrote a note to ask the principal if they could have a sleepover at school, and when the principal didn’t answer right away, they kept writing, each time asking for more amenities at the sleepover (e.g., bacon for breakfast, movies, and so on) and each time constructing the note on a bigger piece of paper. When the principal finally answered the children, the girls’ theory was that big paper was the key factor, and for the rest of the year all their letters to the principal were on large paper.

There are myriad ways to publish children’s writing. In my opinion, the best ways are those that emerge while you are listening to the children. How would they like to make their stories accessible to the world?