Reggio-Inspired Beginnings In A Title One Traditional Public School 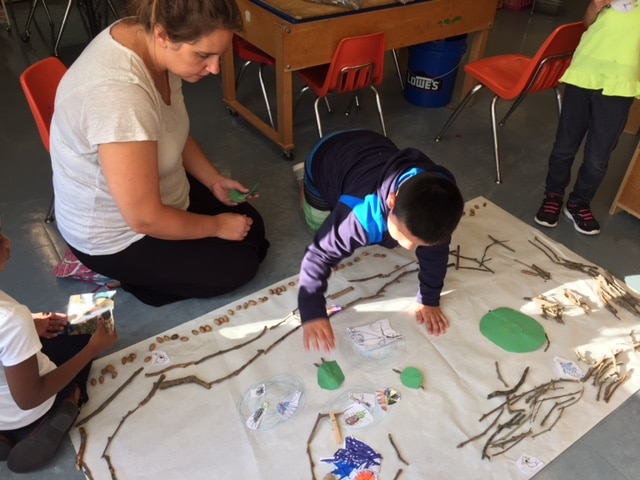 One of the great dilemmas facing teachers in public schools these days is how to reconcile the demands of the testing-oriented public school environment and the knowledge that learning in early childhood happens best through supported play. How do you create time and space for exploration and inquiry? How do you create a culture of conversation when what happens in class meetings is district-prescribed? How can you create a responsive plan for learning when the curriculum is set by those who have never met the children? How do you support children’s development of a sense of agency? And how do you do any of it when your entire day is scripted?

During the 2016-2017 school year I collaborated with Jen Miller-Taylor, a Kindergarten teacher at a local Title I school. Jen is a seasoned teacher, but this was her first year teaching Kindergarten. Both of her daughters were in my Junior Kindergarten class, and from their experiences, Jen was inspired to bring elements of social constructivism to this public school teaching opportunity. Our collaboration grew in scope over time, and by year’s end, we had an official pilot, to include other Kindergarten classes going forward.

Jen is wide open, hungry, and she has what seems like unlimited energy. I spent time with her and the children in the classroom, and she and I met to tackle problems and next steps on a regular basis. By the end of the year, Jen’s classroom was a very different place from what it was at the beginning of the year, yet she knows the journey has just begun. I thought it might be worthwhile to share some of our early conversations. This is a long post, and for that, I apologize. When I searched for pieces of the dialogue to cut, I realized that the act of choosing what might be of interest to readers in this case and what might not would be presumptuous.  In addition, these were just the pieces of conversation conducted through email. There were so many others, in person during long meetings and in passing. I hope that, for those just beginning or for those trying to reconcile a social constructivist philosophy with the constraints of public school, you find commonality in what follows.

Our dialogue began with Jen’s question: “How do I begin?”
She used what little discretion she was given to carve out about an hour at the beginning of the day for Playful Exploration, a time in which the children play, represent, and explore in a prepared environment.
She used her first class meeting time each day to invite the children to discuss what happened during the first hour…to report on what they discovered or played or made, to invite others to engage in ongoing projects, and to hypothesize about phenomenon encountered in play.
During the last hour of the day, she instituted Writers Workshop, with a nod to Story Workshop (Oken-Wright version), in which children draw and then dictate their stories, upon which they base their independent writing. Writers Workshop supports the fundamental writing process of accessing one’s ideas and making them visible better than writing to a prompt or to fill out a worksheet…common practices at Jen’s school… ever could.
This is how Jen started, with two departures from common scheduling, but still fitting in everything that was required into the schedule.

Through the Autumn months, sticking points emerged, among them:
“What do I do when the children ignore a provocation?”
“Why are the children not staying engaged for very long?”
“I feel terrible when I have to disengage myself from Playful Exploration in order to pull children to do one-on-one assessments on paper.”
“How do I scribe for 18 story writers during Story/Writing Workshop?”
“The boys are exploring all these physics theories with ramps, but the girls aren’t choosing it? How can I get the girls involved?”
“I think there’s a big idea under the children’s play/representation somewhere. How do I go about reading their intent?”

By midyear, the children had a strong sense of agency; they were creating narrative around their play; they were growing a class culture around intellectual topics (the physics of ramps and balls; what is a kingdom? for example); they collaborated with and cared for each other; and they were becoming literate, not only in the way prescribed by the county school system, but also for their own purposes. There was joy in this classroom, and other than the occasional exuberant cheer, peace. Though the constraints of the public school system limited the time during the day during which the children could set their own agendas and see them through, limited time for inquiry and exploration, and required assessments that were not consistent with the teaching and learning approach, the results were remarkable. Eventually there were 20 children in this class, four who were brand new to the country and spoke no English in September. There were 9 ESOL children, 2 with speech IEPs and 1 with multiple medical issues. When the children were tested in September, this class seemed the least mature. It seems that none of that matters when you are able to create the kind of community of learners Jen has.

In the following series of blog posts, I will share some of the dialogue we had addressing questions fundamental to beginning to teach in a new way, to setting up the environment, interacting with the children, and beginning to think about learning and teaching in a new way. I hope you find it useful.