The Bensley Pilot Part IV: Setting Up The Environment 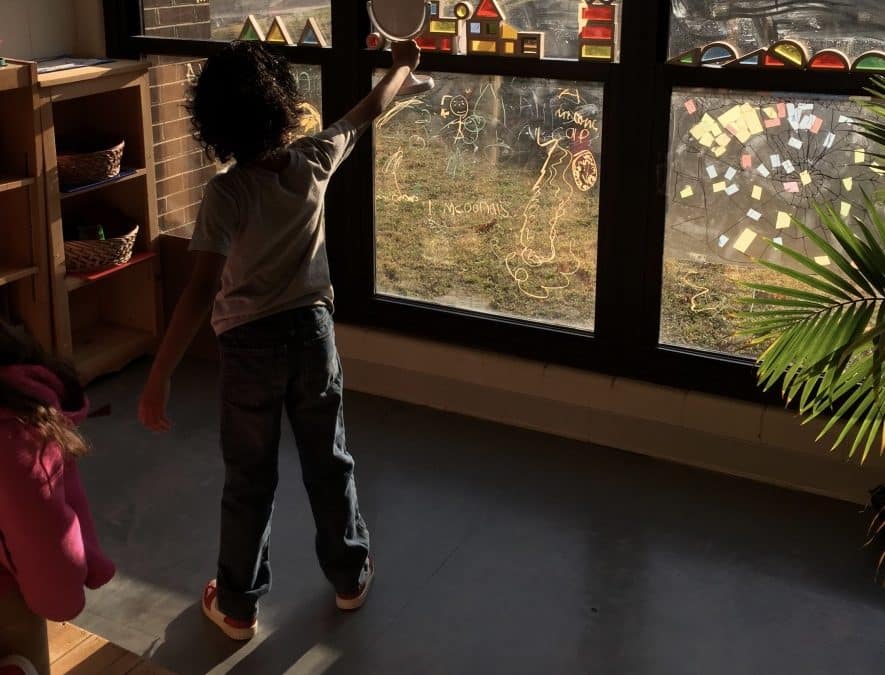 This post is number four in a series, each based on a question asked by the co-author of this pilot program, Jen Miller-Taylor. In the Fall of 2016, Jen was an experienced teacher but new to Kindergarten. She declared intent to bring the principles of the Reggio Emilia approach to her Title One public school classroom. Our collaboration resulted in the formation of a pilot program to take elements of the Reggio approach beyond Jen’s classroom at Bensley Elementary School.

Dear Pam,
I already have another question for you to help me reflect on when we chat…  for the beginning of the year, with Reggio Emilia, do you model each of the center activities or allow for self-discoveries or a combination of both?  Many of our students have never been to school, or for that matter, in any sort of organized daily schedule with peers.
Jen

Before Jen asked this question, we had spent time together on the environment, making sure that there were places in the classroom to build, paint, tinker/make, draw, read, engage in dramatic play, play games, and so on. There was no money to furnish a classroom, so we went to Goodwill, Lowes, and a scrap resource store. We raided our closets and basements at home. We brought in plants and covered the surfaces of furniture in the worst shape with fabric. As the first weeks passed, Jen discovered that the space she’d allotted the block area was simply not big enough. And to make matters worse, the children’s play with ramps and balls was interfering with block play and vice versa. So she adjusted the size of the block area and moved the ramps to the larger meeting space. Similarly, dramatic play and the making space were interfering with each other, so we moved dramatic play to a corner space and let making and drawing have their own dedicated spaces. In this way, room arrangement became a topic of research, with initial hypotheses proven or not by the children’s use of the space, and it was a topic of conversation for us throughout the year.

I answered Jen’s question, above, by describing the way that, when I was teaching, I would start the year with a hypothesis about what might be familiar enough for the children to feel comfortable with right away. Then I would observe their interaction with the materials in order to know how and when to adjust or offer more. After the first day, Jen was pleased with the way in which the children interacted with the environment without being “told what to do.” Here is an excerpt from our email dialogue on the topic.

Dear Pam,
This makes sense! Thank you for the explanation!  I was actually chatting with [my daughters] about this before I emailed you last night to see what they remembered from JK.  C. was right on the money and said that she would explore and play…and then you might give her things to think about while she continued.  As public school teachers, we have been trained to do “teach tos” and explicitly model for students the expectations with more “teacher talk” than child dialogue. I have to tell you, I am so excited about Kindergarten and trying to incorporate more self-discovery this year! My next thing is to figure out how to incorporate it into the mandated schedule and make it as organic throughout the day as possible.

Today, I allowed the students to choose where they wanted to go as they entered the room with some spaces that I knew most kids would be familiar with.  It was AWESOME to see how they gravitated to different things and communicated with their peers.  With that choice element, they were truly engaged!  I am so accustomed to seeing center charts up in the K rooms as a reading teacher at my school.  This was awesome to let go of that and see the kids flow in and out of spaces and activities. I had a small Play Doh station open with 2 cans of Play Doh and 2-3 tools on a tray.  One of the boys recognized it was Play Doh and was so excited to play with it.  He was unsure how to open the container and then questioned how to get it out…we solved the problem together.  I then asked him if he had ever played with Play Doh before and he said no. These kids truly lack the experiences that many other kiddos have.  Through observation of play today, it was insightful to see what tools these kids have in their book bags of knowledge.

I purchased these River Stones this summer and they finally arrived yesterday afternoon!!! I was thinking about putting them out in the block area for [the children] to explore….if they want to use the planks to walk on and use them at stopping points or whatever their imaginations create.  Do you have any other suggestions for how the children may want to use these? I attached a picture of them. Jen

Dear Jen,
I love, love, love how excited you are! The children will undoubtedly have plenty of ideas about how the “stones” could be used! Why not start in the block corner? Then see what the children do with them. You might not want to call them stones…see what name evolves. Just a suggestion. Sometimes I liked to put a provocation like this out by marrying it to other materials…so, if you’re putting them in blocks, maybe make a simple bridge and see what they do when they find them. Cheers, Pam

Dear Pam,
So I followed your suggestion to see what came out of setting up the stones with a simple bridge this morning. Blocks is usually a center many kids enjoy and gravitate toward. Not one kid played in blocks or even asked about the “stones” this morning. When it was time to transition and meet about our discoveries, only then did one kid go over there to clean up the set up I made. I went over and asked K while he was cleaning up what he thought they were and he then brought them over to share with the class. At that point, a conversation started about the different shapes and colors they were and how they thought they could incorporate them into areas of play around the room. What is your take on no one asking what they were or even playing in the blocks?  All I could think of is maybe they thought another friend was in the midst of playing with them or the stones were so foreign to them, they did not know how to even begin to handle them.  I was just so shocked that there was no inquiry about them. But, after the class discussion, excitement definitely grew. Jen

Dear Jen,
Interesting! It raises several questions for me. Do the children not feel ownership of the classroom yet? Do they think they need a direct invitation to play with something new even in a familiar area? Are they perhaps not accustomed to investigating and exploring something new? (It’s possible that this is not allowed at preschool or at home, in which case they will not act on their curiosity until they have a stronger sense of agency). Are the materials too unfamiliar? You know how if you say something to a young child that is way beyond their understanding they will just ignore you? Could that also apply to objects in the environment? Are there “don’t touch” areas of the classroom? They would not have explored those enough to know them, and so would have no way of knowing whether these also-unfamiliar materials might be verboten. I have to say the stones and your arrangement look great. And, whatever the reason the children did not engage with them, you have found a way in for them, through conversation. In time I expect they will have that same kind of “conversation” with themselves when encountering something new in the classroom. I’m looking forward to seeing how the children’s approach to new, unfamiliar provocations changes. If it does, you will be witnessing a change in their perspective and it will be evidence of their growing sense of agency. So I would not call putting the stones out without introducing them a flop. Rather, I think it is a first step/baseline in a great teacher research project. Can’t wait to hear what they do with the stones tomorrow! Cheers, Pam

Dear Pam,
All great thoughts and insights! My gut is telling me that these materials were so unfamiliar and foreign to them that they were hesitant and reluctant to even attempt an interaction with them. I also think that many [of the] students at our school have limited interactions with loose parts play where their imaginations are allowed to create and expand on what they know.  I think combining an unknown material with a familiar material was beyond their scope on how to make sense and meaning out of them. The fact that D had never played with Play-Doh is very telling about the limited experiences these students have.  I think another part is that kids are accustomed to rotating through centers and [exercising] choice is something very new to them. What are your thoughts for tomorrow….should I just let the “stones” be and see what they do?  Ch suggested using them as baskets to carry stuff while A attempted to stand on them….I LOVE the suggestion you made about NOT naming them “stones” and therefore, limiting their possible use!  This truly allowed for an open interpretation of how we can use them. Jen

Dear Jen,
Wow. Can you imagine what these little ones will be capable of once they connect with their own agendas and get some experience with materials? I would be curious as to what today’s conversation about the stones inspires with them tomorrow. So maybe find a home for them but do no more than point them out if they aren’t obvious? I can’t wait to hear what happens! Have a good night, Pam

The children did, indeed, incorporate the stones in their play from the very next day on. As the weeks passed, and the children “learned” the classroom, Jen became puzzled that the children did not seem to be as engaged as they had been earlier. At that time, I was not yet visiting the classroom on a regular basis and did not know what might be the cause of the disengagement. So I planned a visit and, while in the classroom, witnessed exactly what Jen had observed. The children were spending only short amounts of time at each area, something you might expect when everything is new to the children. But this was several weeks into the school year. Fortunately, the problem was easily solved. Over time, the offerings Jen was making were essentially closed-ended “activities.” They were attractive, so the children went to them, but once the task was done, there was nothing more to do. I realized at that point that my image of experiences worth offering children was not the same as Jen’s. I suggested that offering open-ended materials, rather than activities, might be more engaging, and certainly more versatile. Jen started simply, with construction paper, scissors, pens and glue. She was amazed at what the children constructed…day after day, immediately engaging for long periods of time. Eventually, the children needed string, hole punchers, and loose parts for their constructions. In the end, the construction paper offerings evolved into a full-fledged making space, with materials available as the children needed them.

From that point on, Jen offered materials for exploration and representation, letting “activities” go and welcoming experiences in.